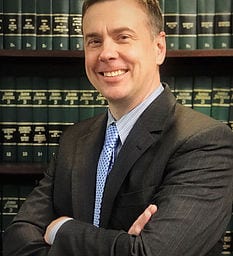 Mr. Loweth began his legal career in San Diego before moving back to Chicago, where he grew up. For over ten years, he practiced law at Johnson & Bell, a trial firm in Chicago, focusing on business and commercial litigation. He moved out to the Bay Area six years ago, where his practice focuses on commercial litigation and employment law. Mr. Loweth’s representative experience includes:

Acushment v. Cam Golf, Inc. (N.D. Ill.) Represented a suit for trademark and trade dress infringement on behalf of the Defendant, Cam Golf. Settled allegations of counterfeiting against the Defendant who was not aware of the counterfeit nature of the product, by invoking and enforcing insurance coverage clauses that protect against advertising injury.

Q Sales & Leasing LLC v. Quilt Protection, Inc.,(N.D. Ill.)Represented the plaintiff in a trademark and trade dress infringement suit that was settled in favor of the Plaintiff. State Court

White v. LinkedIn, Inc. (CA)Represented LinkedIn in an appeal of a decision granting summary judgment against a former employee who claimed to be discriminated against. The decision was upheld in the client’s favor on appeal.

Away from his law practice, Christopher enjoys spending time with his three young children, volunteering with Boy Scouts and 4H, and going camping with his family.

Contact Us
Practice Areas
Client Reviews
★★★★★
Mr. Cai Is a Diligent Attorney. My sister and I were defendants in a civil litigation case. We hired James Cai and his law firm, SAC Attorneys LLP. Mr. Cai is a diligent attorney and responded to our questions in a timely fashion. He and his staff were very helpful in keeping us informed of the proceedings of the case and in explaining each step. Mr. Cai is also very conscientious of fees and costs, and avoided unnecessary charges. The results of the Summary Adjudication sided with us. The Court Trial resulted in the “Final Statement of Decision” and “Judgment after Court Trial” overwhelmingly siding with us. Cynthia F.
★★★★★
I Am Truly Impressed. After spending a significant amount of time, money and efforts with my previous counsel at a larger law firm without getting meaningful results, I transferred my employment matter to SAC Attorneys LLP. The attorneys there were able to understand the complex situations of my case and put together an aggressive litigation strategy. We were able to file a compelling complaint within a week and forced the opposing party, which was represented by one of the largest law firms in California, to make a substantial settlement offer shortly thereafter. I am truly impressed by the no nonsense and results oriented approach by SAC Attorneys LLP attorneys. A job well done! X. Gao
★★★★★
They Took Time to Understand Our Technology. I am the founder of a bioinformatics start-up in the Silicon Valley and chose SAC Attorneys LLP as our corporate counsels. Their attorneys have great experience with high tech start-ups and were able to offer a highly competitive service plan while not sacrificing a bit of their quality of services. They took time to understand our technology and provided value added services by introducing investors and job candidates to us. We regard our attorneys at SAC Attorneys LLP not only as our legal advisors but also our venture partners. Dr. Pete S.
View More
Submit a Law Firm Client Review